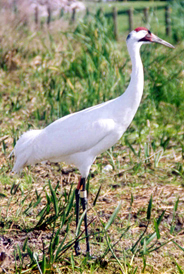 We opened the pens and let them out
On the Florida prairie, the young whooping cranes,
They were so beautiful in that early light,
As I watched them walk into an amber mist,
Their cinnamon and beige feathers melding with
The delicate reds and golds of the marsh grass,
Before they disappeared in the morning glimmer
That flashed like sparks from the lake

My mother raised me and my older brother
After my father died, teaching me the ways
Of the wild she had learned over a decade,
Having been born in captivity, released from a pen,
A one year old with no survival skills,
A small instinctual handbook carried beneath her wings,
And she taught me and my brother to be wary,
Look both ways, and stay close by her side

I loved to stalk through the marsh, and romp
In the prairie grass, splash in the swamp,
Fly with my brother, hang ten
With the Sandhills coming in to evening roost
And my mother said they looked like our shadows,
Friendly ghosts, who would help keep away the terror
That comes in the night, but when I was six
The terror came and took my brother

My mother and brother built a nest
And we were surrounded by eyes cold
With moonlight, as he stood with wings outspread
To defend us, and the nest, our future,
But they lept and dragged him away.
Soon after I saw the large figures scrambling around
The marsh, and then they cried out
And took away his body

You can’t imagine the surprise my pilot and I felt
When we flew over a marsh by Lake Okeechobee
The little plane making a small insignificant shadow
On the vast expanse of water and marshlands,
And saw two cranes nesting in the wildest
Of wild places, and when we landed we saw
The older female, and with her, a younger female
By a decimated nest

Okeechobee is not a safe place to be, to nest,
To thrive, and we found the young male
Or what was left of him, thanks to the transmitter
And as we left we hoped the other two
Would abandon this place, and fly north
To the ranches and preserves of Osceola County,
And again we agonized over the death toll
Of this experimental flock

My mother and I flew back and forth from the big lake
To the smaller one, and spent our days feeding
From the troughs alongside the cattle, in spite of the odor,
And whenever the large figures would appear,
Holding black objects and huddling or darting around,
Sometimes my mother would say, ignore them,
And other times, let’s go,
They’re getting on my nerves

I watched the cranes for another five years,
The older female was over 20, a good
Long life for a captive-raised crane in the wild,
And her daughter, 1441, was over 10,
Without a mate and only her mother
For a companion; sparks of crimson
And brilliant white
In the tall green grass at sunset

And then I saw her, alone, on Canoe Creek Road
Radiant on the ranches and farms of Lake Kissimmee,
The younger female, now in her prime,
And I went home, only to wake up in the dead
Of night, and think of that whooping crane:
How people who see her will whoop
With pride at having seen her in the wild,
And how resilient she is, and how vulnerable

And what does it matter, one lonely bird
On one lonely road
When there are people dying in Syria,
When there’s the scourge of cancer,
When children are caught in the crossfire?
But I can’t help thinking of you,
1441,
On this dark night

289 whooping cranes were released into the wild in Central Florida between 1993 and 2004 in an effort to create a non-migratory flock. In 2008 about 30 were still alive. The project was ended due to the high mortality and lack of success raising chicks. As of 2017 only fourteen survive. Four chicks born in the wild survived to adulthood. 1441 is one of them.

COMING SOON! Watch this blog for special offers related to the publication of my new book, Miami Morning, coming from All Things That Matter Press. You can also sign up for email notifications and receive information about additional Special Offers on my website.

From South Beach to South Africa, Leila has an adventurer’s heart.

The creation of my heroine, Leila Payson, was inspired by a woman I knew. She, like Leila, had a full-time job, but she spent hours each day as the “guardian angel” of the local playground, and in community improvement activities. Her smile made others smile. She 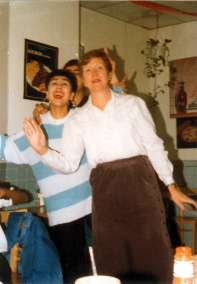 was generous, but she knew the cruelty human beings are capable of. She was curious about the world, courageous in her approach to problems, and had a self-deprecating sense of humor. Without any fanfare, she did her work and improved the lives of many people, even if only in making them believe in their own decency. I feel passionately that such good people make all the difference in the world.

Leila lives in a place I love: Florida. Although I don’t live in South Miami, my intuition and research led me to this place. It was perfect for her. Leila enjoys the big city, with its cultural richness, and also living in a smaller town, with nature near to hand. There’s a wealth of experience in this book: teaching, disability issues, occupational therapy, a diverse group of friends, travel, family, romance, food, and nature. I hope you’ll come along for the ride.