Cornelius Eady is the author of eight books of poetry, including Hardheaded Weather: New and Selected Poems (Putnam, April 2008). His second book, Victims of the Latest Dance Craze, won the Lamont Prize from the Academy of American Poets in 1985. The Gathering of My Name  was nominated for a Pulitzer Prize in 1991. Brutal Imagination was a 2001 finalist for the National Book Award.

His theater work includes the play, “Brutal Imagination,” based on the Susan Smith story of her children being kidnapped by an African-American man. He collaborated with Diedre Murray on the libretto for the opera, “Running Man,” a finalist for the Pulitzer Prize in Drama in 1999.

In 1996 he co-founded Cave Canem with Toi Derricotte, a summer workshop/retreat for African American poets. He has taught at the University of Missouri and SUNY Stonybrook, Southampton, New York.

I first met Cornelius at a reading of Home Planet News in 1980. In the audience, willowy Patricia Fillingham, a poet from suburban New Jersey, had found a home away from home on the New York poetry scene. With her Warthog Press, she published Breathe: An Anti-Smoking Anthology of poems, cartoons and songs, edited by Shel Horowitz, and Kartunes, a collection of poems by Cornelius Eady. I believe Kartunes was Cornelius’ first published book of poetry.

That fall, poets and actors performing poetry caravanned through the Poetry Festival. Cornelius Eady and Shelley Messing taped some of these events, as part of their work making audiotapes of poets for WBAI around the city. Always amiable, Cornelius was generous with his time and helped promote other poets. 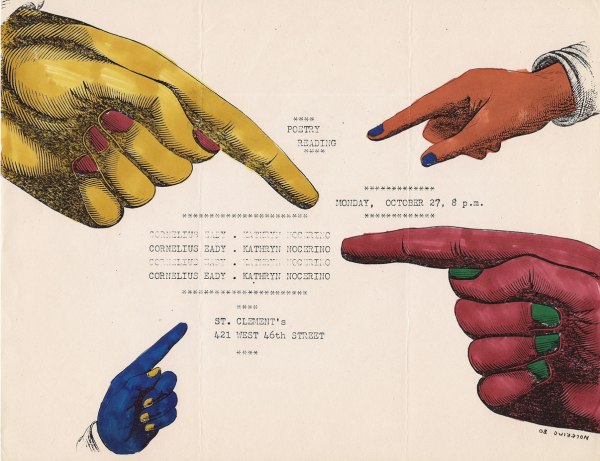 Cornelius Eady and another poet, Kathryn Nocerino, appeared together at the Poetry Festival at St. Clement’s, 423 West 46th Street, NYC, several times between 1979 and 1983. One reading was on December 21, 1981. At one of these readings, in the large sanctuary and theater space upstairs in the church, I photographed Cornelius with his portable microphone. Tall and thin, he swayed like bamboo while he read. His poetry is compassionate with an edge that cuts into and through veils of ignorance. He fuses music with language about race, social issues, family, and love.

You can read more about him along with some of his poems at the Poetry Foundation.

Music and the Thoughts It Can Inspire

A 60-something guy trying to figure out the world, and his place in it.