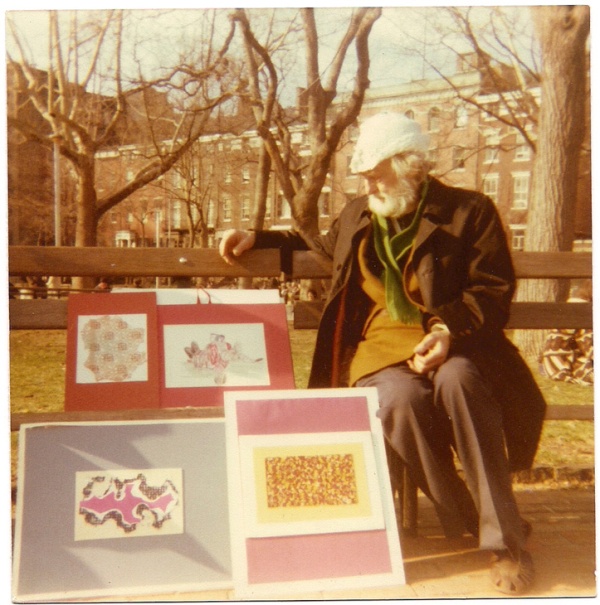 I think a reviewer owes a reader some declaration of his or her intersection with a book, why they read it and why review it, so any opinion is given a clear lens.

I bought this book for its title, knowing little about its subject, except that it was bound to be philosophical. I am interested in any reflections on the meaning of our seemingly haphazard existence and any wisdom pulled like threads from a personal tapestry and rewoven.

The discovery that it was about the near heyday of Greenwich Village, and characters living like rats in neglected garrets or churches momentarily vacant and underused, and the noble small presses pushing out chapbooks or poetry readings was a definite plus. This is a world I had heard about, but never directly sampled. The shadow of Alan Ginsberg and his ilk loomed large.

My only connection with this world was through a long and wonderful correspondence with an editor at Alfred Knopf, Sophie Wilkins who had mentored John Updike, George Braziller, Thomas Bernhard, William F. Buckley and many others now renowned, but who also found time for me. I did not deserve the attention she gave me but that was a reflection of the world of letters in that period, and this book, and the character of PJ evoked that distant generosity in which writers and writing were the only things that mattered. So my inclination was to absorb it as it came; sympathetic to the exhilaration of a world open to youth, even jejune youth avid for acceptance. That I did understand.

What makes reviewing it problematical is the autobiographical celebration of the main character PJ (Paul Johnston) who was clearly the seminal influence of the author’s life. His almost total (and vividly recreated – seemingly verbatim) philosophical reflections are almost all interesting, many provocative, never dull. Yet he is in unwinking focus throughout. I seldom abandon a book once I have committed to it, and I was never tempted to abandon this, for its lucid re-creation compelled, and it is cleanly written. That ‘cleanly’ is not meant to be derogatory, on the contrary, it served to keep the tungsten light firmly on the stature of its single character PJ whose shadow deepened increasingly, although his actual daily presence diminished. He was like a thread of elastic, the more stretched the greater his pull.

In a way the influence of PJ was to effect a growth of the author, incrementally strong enough to escape him. Yet the narrator Erin is in such thrall to PJ, so bent upon her tribute to his ideas, and his tragically diminishing physical powers she hardly seems to exist. Her peripheral relationships founder one after another, as perhaps they did, but this self-abnegation extends even to the absence of smell, or colour or atmosphere. It is a work about ideas, mostly the ideas of PJ, and nobody has a greater appetite for ideas than I do – a wonderful section on art being invisible but authoritative when it takes the creative reins – yet the author gave herself little liberty to live outside the mind. Or not on the pages of this seeming memoir.

What seems to happen is the repeated distillation of ideas repeated and refined until they have the clarity of 90 proof vodka, sharp, invigorating but with scant taste. I would love to meet this author and exchange vodka for single malt whisky with peat and autumn and the scent of heather, and woodsmoke and ask her to tell me about why PJ had such power, and whether having delivered her tribute she could now live a little lighter for it?

I urge you to read it nevertheless, if only to enjoy a quarrel with PJ, or to give thought to his uncompromising belief in intuition as the basis of relationship, a better index of love, a more autonomous source of creativity. In this he did master an understanding; and this work does certainly illuminate his originality, recognised by his (over) modest scribe, Erin.

Tally: An Intuitive Life by Mary Clark, published by All Things That Matter Press, is available on Amazon and Barnes and Noble

‘Tally: An Intuitive Life’ celebrates questioning and follows the thread of discourse to illustrate how self-discovery is made by way of life’s journey passing through many destinations.

Wandering along a narrative rich with compelling philosophical conversations and very personal events, this remembrance of Bohemian artist, Paul Johnson (PJ), transports the reader to avant-garde Greenwich Village in the 1970’s and 80’s and further back through his earlier history. Much of the book allows the reader to have a `fly-on-the-wall’ look into the solitary, collaborative and transformational experiences of the creative, eccentric, needy yet detached `intuitively conscious’ PJ; and the absorbing, if often ambiguous, connection he makes with the sensitive, curious, compassionate and intelligent young poet and community organizer, Erin.

I was especially drawn in by the novel’s main storyline of youth intersecting with old age on a basis of shared pursuits and exploration of ideas. In today’s society, there is often separation of the young and the elderly, as if one is offensive or even a threat to the other. It’s usually assumed they have nothing in common or to cultivate with each other.

The young can put a lot of time and energy into longing and looking for external experiences to shape their lives; even those who are creative tend to expect inspiration, knowledge and fulfillment to come from somewhere outside of their own abilities, feelings and instincts. In its best scenario, aging makes us weary of life’s pursuits, necessitating reflection over action; so we become less frantic and more self-realized and consciously alive at eighty than we were at twenty.

PJ can `speak’ for himself on this: “Let it cease. I have created many new identities. I have found new reasons to live. I have lived through phases of bliss, of romantic love, phases of death of consciousness, of depression and aspirations beyond achieving, and the fullness of the joy of being alive.”

This review is by Diane M. Denton, author of A House Near Luccoli, All Things That Matter Press, available on Amazon and Barnesandnoble.com. Her forthcoming book, To A Strange Somewhere Fled, is a sequel that continues the adventures of the shy but curious (in more ways than one) Donatellla. Visit her blog, bardessdmdenton-prose, poetry and painting.

A quest for the magic in life, language, and literature

If music be the food of love, play on✨

From the Pen of Mae Clair

Mystery and Suspense, Folklore and Legends

The Way You See Your World
Poetry Box

Within A Forest Dark

fiction and reflections by Margaret Sefton

Reviews of books...and occasional other stuff.