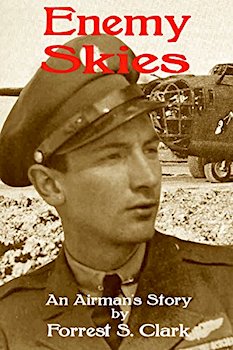 Duty, courage, fear and bravery are words known by soldiers in battle. In World War II, Americans joined the fight against Hitler and his cruel regime. These soldiers, when face to face with the highly organized, technologically efficient enemy, learned the meanings of other words—brutality and wastefulness.

Enemy Skies is a memoir by Forrest S. Clark, a young B24 gunner and radio operator with the 8th Air Force. He was stationed in Norwich, England, with the 67th Squadron, 44th Bomb Group, known as “The Flying Eightballs.”

Forrest Clark witnessed fiery deaths in the skies over Germany, heard the click-click of the bombs dropping, and saw the fires in the cities below. Some of the airmen who died, or were listed as MIA, had become friends. In April 1944, he was on a mission to Lechfeld Air Base, near Dachau, south of Augsburg, when his B24 was hit in the fuel tank. Pursued by German fighters, the pilot turned the plane toward Switzerland. The pilot was Lt. Rockford C. Griffith, renowned for his one wheel, one engine landing, at Shipdham Air Base, in Norwich, England, after a mission to the German-occupied air base at Kjeller, Norway. The crew was later interned in Switzerland, until one by one they escaped, finding their way over the French Alps into war-torn France, and back to Allied lines.

Clark received the Purple Heart, the Air Medal, and was a member of the Caterpillar Club and the Swiss Internees Association. For many years he could not share the memories that haunted him. But now he has recorded his still-vivid memories of his experiences of innocence and death, romance and terror, in the skies over Europe in World War II.

Enemy Skies is available on Amazon/Kindle.

Music and the Thoughts It Can Inspire

A 60-something guy trying to figure out the world, and his place in it.