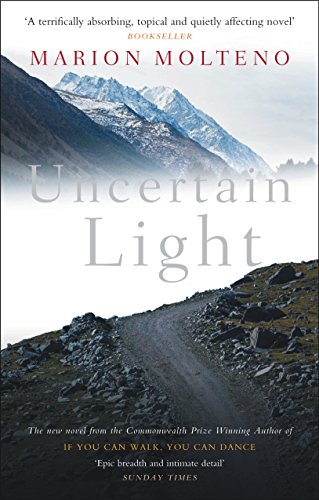 I was drawn in slowly, sometimes considering not going on, but beyond the valley mists and the world’s tallest mountains, lurks a promise. That kept me reading, and I’m glad I made the journey. This is an amazing look at people whose work we hear of, and yet do not know, at places remote and veiled in violence, where refugees gather and ancient towns bury their treasures.

One of the great treasures, discovered only after trust is achieved, is the work of a local poet, imprisoned, disappeared, his poems suppressed by one government after another. But he is not forgotten, his poems have been disseminated throughout the region, in various translations. The skill needed to translate them into English creates a new and surprising network of local and foreign people.

The story begins with the kidnapping and presumed death of a U.N. Refugee worker, Rahul Khan, in the inhospitable yet alluring landscape of Central Asia. Rahul is a seasoned worker in war-torn areas, with refugees and rogue groups, a dangerous job, but his inter-personal ability has seen him through many tense situations. His loss shocks his friends and co-workers. They reflect on their relationships to him and their loved ones and begin to re-assess their lives. Meanwhile, the uncertain situation in the borderlands near Tajikistan continues. Work goes on. Two of Rahul’s co-workers, Hugo and Lance, who became his friends, struggle to continue this work. Another, Tessa, is moved into transforming her life and taking bold action.

In time, the different individuals whose only connection is a man whose death has shaken them are drawn to one another and discover the depths of their bonds. These are no hive-mind of like-minded people. Instead, each person has a distinct history, and carries an aloneness which is palpably felt in every moment. Even as they search for connections, each one keeps to her or his solitary walks. This yearning and this isolation accompany those who work in unsettled areas, who move through uncertain light.

Molteno’s experience with Save The Children comes through with portraits of the trauma children live through in turbulent times: their loss of family members, shelter, food, and education. “‘Them’ and ‘Us’ wasn’t primarily about cultural difference, the unbridgeable divide of life-chances was between the children of whatever race or religion who went to school like hers … and those for whom school was an unreachable dream…who sold things at roadsides, who carried heavy loads…”

In Hasilgah (the place of achievement which was originally named Be-hasil-gah, a place where nothing can be achieved), a town near the border of Tajikistan, a small group of people, many women, and the men who relate to them as equals, keep family and community together in adverse times. They protect not only children – future creativity, but also the creativity of the past. “Each step … forward will also be a reaffirmation of what mattered in the past.” Life is both history, social and personal, and future, challenging and beckoning, but the struggle for healing and wholeness always takes place in the present.

Where there's only one step from the sublime to the ridiculous.

words to inspire and empower

On Reading and Writing... mostly.