In the early 1990s I published a monthly community newspaper called the Clinton Chronicle (NYC). This review was written by Claire Machaver, a woman whose joy was manifest along with her generosity.

At the Long Fine Art Gallery, the cumulative effect of the glow of the multiple dense Red and Black Aquatints is striking. Robert Motherwell likened this effect to Plato’s image of art as the shadow cast on the dark cave’s wall by persons passing by the fire. In the Republic, Plato regarded such viewing of shadows as the first step in the path toward viewing the brightest of all things in the material world, the Sun – a metaphor for the vision of the best among realities, wisdom.

Motherwell’s graduate work in philosophy and psychology at Harvard and later studies in art history with Meyer Schapiro provided him with the impetus to address problems of visual communication. With this background, he could draw upon such masters as Mondrian, Matisse and Picasso.

For nearly a decade Motherwell addressed a continual problem of uniting disparate elements in his work.

“It used to cross my mind from time to time that it would be much more intelligent to go the other way – To begin with unity and then, within unity, create (through dividing) disparate elements.”

Motherwell became the heir to Mondrian’s rectilinear geometry and Matisse’s reduction and simplification of his own prior paintings.

Resolving the issue of inside/outside in his Open series of paintings, Motherwell employed a window motif that remains on the picture plane rather than functioning as an illusion of space. These windows do not describe a view. Instead they distill the geometry of all windows and act as symbols. Motherwell’s spare, elegant black lines suggestive of open windows in number 9, Red Open With White Line (1979), and in numbers 4 and 5 in the exhibit, Untitled (1972-73) recall the windows in Matisse’s 1914 painting, French Window at Collioure, a simplification of his 1905 painting, The Open Window (Collioure), and his 1914, View of Notre Dame, a simplification of an earlier View of Notre Dame painted the same year. 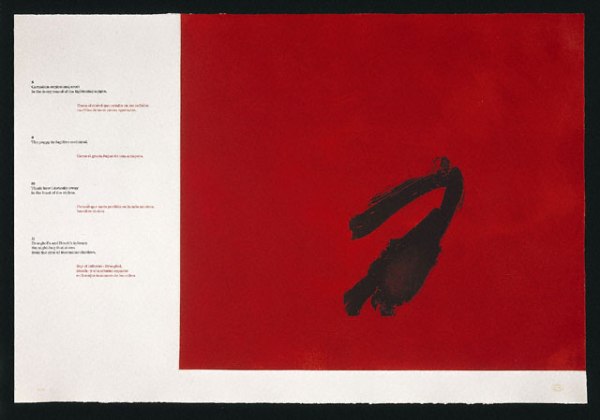 It was Picasso who first indicated in his writings as director of the Prado museum and in Guernica, with its symbolic and mythological references, how a painter might bring together images that would be universally recognized as archetypal symbols, with the expression of the social consciousness of the artist.

Motherwell wrote, “Every intelligent painter carries the whole culture of modern painting in his head.” The abstract imagery he developed was derived from dialogues with political events, other art, literature and psychoanalysis. Red Sea 1 (1976) is one of the first prints to fully employ automatic “gestural” drawing. Referring to the gesture, Motherwell said, “the true way to imitate nature is to employ its own processes.”

Motherwell explained the intensity of the Red and Black Aquatints. “What aquatint can do . . . better than any other means of a painter, is to saturate certain mould-made papers with an intensity of hue that cannot be equaled (except perhaps in stained glass light).” Aquatint is a specialized technique which uses a metal plate coated with a porous resin to create a granulated effect. This beautiful show provided a lasting impression of a master’s graphic oeuvre and his remarkable ability to use the gestural image in abstract art.

We only live once. Hence, let's not stop dreaming

David is an author of fantasy novels and a writer and producer of rock music. The site provides information of his creative works and has a regular blog of news of his latest work and insights into his life and past.

Writing with sense and sensuality