Chapter 7 of Tally: An Intuitive Life, All Things That Matter Press 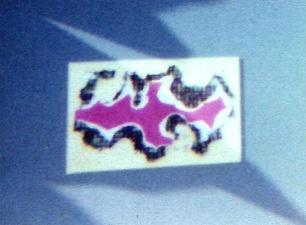 Talking about his artwork, PJ said, “You have to get away from the idea of creating work out of your head or out of the objects you see.”

Rogue held one of PJ’s “Impressions,” running his fingers over the braised surface of cloth, paper and matte background. “Purely by chance. These are purely by chance.”

“No, No.” PJ reset his words. “I worked ten years as an art student, painting and so on, and the first exhibition I had was at the Woodstock Art Gallery and Whitney Studio Club in New York. But right away, I didn’t want any more paintings. I didn’t know what I wanted. And it took, well, I was in my forties, when I was working on the PJ Impressions.”

“And finally, I got the basis of abstracting an abstract.” PJ laughed an infectious quick laugh. “I got the abstraction from which any number of new forms could be produced. It was reduced to a sort of a scale, like a musical scale, there were instructions of what I should do to get a form at all and my surprise at what I got. So that applied to the textile design.”

“You did textile designs?” I was surprised that he would be involved in such a commercial enterprise.

“For about five years. When you see any home décor, take time to look at the patterns, the geometrical shapes or the flowing shapes, and colors. Someone designed that.”

I nodded, wondering at an artist spending creative energy on these things. But then again, Andy Warhol showed that commercial art could be far more.

“The point is,” PJ regained momentum, “Leonardo’s influence extends to today when you go into a store and any package that you see has a Leonardo-like rendition of what the contents of the package are, all printed up in beautiful colors and likely forms. Today I was thinking abstract art has no object. It has nothing to sell. It is simply form and depth and movement. And that’s what these are.”

“How did you come up with the idea?”

“I have an idea about how I got these things. But having got them in that way I can’t make up my mind I’ll do it again and get the same sort of results. It was an unintentional organization of color and form. It can’t be imitated.”

“Didn’t the pop artists have a similar method,” I said. “Or were they consciously directing their work before they did it, while they did it?”

“The best let the designs formulate themselves, using certain elements. Warhol had a sense of play in his work. And he developed a method of replicating designs so that each one surprises. It’s always a fresh experience.”

“Capturing the moment,” I said. “Which one is the truth, the original, the flawed one?”

Rogue rested the artwork against others. “Do you think Warhol was mocking us?”

“I think he loved his subjects, but he may have taken advantage of the commercial world and also meant it as a rebuke.”

3 thoughts on “Abstracting an Abstract”

Where there's only one step from the sublime to the ridiculous.

words to inspire and empower

On Reading and Writing... mostly.